Anyone who can remember my post about this event in 2012, may be surprised to see another post on 2013’s event.  The reason is that I received an offer that I couldn’t refuse.  Neil Fairclough, the pyrotechnic expert who has run this display for many years had noticed my blog post from a couple of years ago, and asked whether I would be interested in attending again, with an offer of a tour ‘behind the scenes’.  After reading last year’s post, he also offered complimentary tickets, and to ensure that I didn’t have the same experience this year.  The decision was made, with the sincere hope that I could get some photos that were at least as good as last year.

I was also invited to take a friend along.  Garry, and his wife Janet were keen to come along so arrangements were duly made.  This all happened last November 9th, 2013, so I must apologise for it having taken so long to produce a post on the event. I won’t bore you with the usual excuses.

This is quite a long post with a lot of photos, best viewed as slideshows by clicking on the first in each series and then scrolling through them.  I hope that your stamina holds out.  Some of the photos are captioned, but I hope that most are self explanatory.

We started by meeting Neil and other members of the Pyrotechnic Display team on the Saturday morning.  The first job was to find a suitable spot from which to view and photograph the display.  Previously, I had been in the front row of the viewing ‘crowd’, with the inevitable degree of jostling from children keen to get a good view.  To overcome this, and the previous year’s problem of getting a clear view of the display, our privileged position this year, enabled us to move out of the ‘public’ area into a position on the water’s edge in the woods, just to the right of the public enclosure.  Another member of the team, Rob Wallis, was to take charge of getting us into our chosen position in the evening, without causing too much trouble with the public.  So far, it all looked good.  The following two photos demonstrate the view from this position during the morning daylight.  The vans in the distance are parked in the general area from which the fireworks would be ‘set off’.

Neil then took us around the lake, to the display area.  We were introduced to Steve Martin, who owned the ‘SM Art Pyrotechnics’ company from Salisbury, and were then shown the whole process of setting up the display.  I’m afraid that it is difficult for me to recall all of the information that we were given.  I should have taken a voice recorder.

We were also able to wander around the site at will, so the first few shots are really to show the area in which the pyrotechnics were being set up.  A couple of the shots show the pile of wooden pallets on the hill, which were to become the bonfire, lit half an hour before the firework display.  It is lit by remote means and we did spot what the local fire brigade would call ‘cans of accelerant’, which were to be poured on the pallets before lighting.  I also understand that they often incorporate a few ‘duds’ from previous displays into the bonfire, to add a little extra sparkle.

Basically, the vans that can be seen in the next series of photos are, or were before they started setting up, chock full of fireworks.  That’s quite a load of explosives, and immediately raises the subject of public indemnity insurance and fire safety.  These subjects are taken very seriously by the event organisers.

All the fireworks are electronically fired and controlled wirelessly from the other side of the lake.  The ‘high flying’ fireworks are fired from ‘mortar tubes’ of varying diameters.  They don’t use ‘rockets’ in these displays anymore.  By the van, can be seen some of the ‘combined’ sequential fireworks, a bit like what the public can buy, but much bigger.

Setting up this show is necessarily a pretty intensive few hours, on the day of the display.  A team of several pyrotechnic technicians was involved, placing the fireworks and mortars, and wiring the fuses to the controllers.  To us, it looked pretty chaotic, with wires strewn everywhere.  We certainly needed to watch where we were putting our feet.  It was obvious though, that the team knew exactly what they were doing and that the apparent chaos was superficial.  In fact, it was a very professional job.

The gazebos, tarpaulins and polythene sheet were all necessary because the weather was a little changeable, with showers threatening at any time.

After getting a good view of the setup process, we went home for lunch, then to return to watch the display in the evening.  Happily, there would be no need to get there at 5:00 pm to guard a space for our tripods this year.

Since we had arrived with some time to spare, we decided to have a look at the live music stage before making our way to our viewing spot for the display.  The band was called ‘Headland‘, and I must say that they were pretty good, especially considering the cold which must have numbed their fingers.  The ‘Wicked Queen’, from a local performance of ‘Snow White’ at the Octagon, Yeovil, lit the bonfire at 7:00 pm and the last rather blurry shot in the next group is of her.

Finally, we get to the images of the firework display.  I had hoped that they would be better than those that I took last year, but alas, they are not.  I based my exposure on the shots from 2012 but then forgot to reset my ISO correctly with the result that highlights have generally been ‘burned out’.  Sorry Neil!

If you have survived this marathon post, then thank you.  I promise not to make a habit of posts that run to this length.  I hope that you did find the time to view each group of images as a ‘slideshow’ by clicking on the first and then scrolling through the gallery.

If I get a chance to, then I would very much like to photograph the display again this November, but from a completely different angle.  I’m not sure whether this will be possible though.

Thanks for visiting and please keep an eye open for future, much shorter, posts.

I need to have a grumble so I’m afraid that this post is going to go on a bit.

Now I tend not to be a very dedicated photographer.  Sometimes, when it looks like tough work, I opt out.  Sometimes, however, I will get inspired and make an effort.

A couple of years ago I attended a Fireworks Display at Sherborne Castle Lake, and I think I got some reasonable images.  Now, photographers know that if they are going to photograph a firework display properly, they should arrive early to grab a good position, set up tripod and sort out focus points etc.  On that occasion, although I was pleased with my efforts to be there on time, I was still a little too late to get the best position for both the fireworks and their reflection in the lake, even though I had to stand in the cold for well over an hour before the display started.

Dee and a friend of hers fancied going again this year.  Since I now had a wide-angle lens added to my kit, and I thought I had learned from the mistakes of two years ago, I thought perhaps I would go along.  To show my dedication to my chosen hobby, my plan was to arrive as soon as the event opened, thus being able to choose my spot and get everything set up, even though I knew I would have to wait for more than two hours before the display started.

Imagine my delight as we walked down to the barrier by the lake.  There were no spectators there yet so my shooting spot was claimed easily. The only people around was a group of Event Stewards, who complimented me on my early arrival, and promised that they wouldn’t get in the way when the fireworks started.  I chose a spot where there was a narrow gap in the plants growing around the lake.  This would give me the best view of the reflections.  After I had set up, I settled down with my flask of tea to wait the two hours until the display started.  Slowly the line of spectators at the barrier filled up, but I was alright; I had the best spot.  This helped me through the boredom, and the need to listen to a fair bit of PA broadcast music that I wasn’t always that partial to.  Dee and her friend were of course, off enjoying the music of a live band which was much better than the rubbish the DJ was playing over the PA system.  I gather that they were also enjoying mulled wine.

About half an hour before the start of the fireworks, a new Event Steward, that I hadn’t seen before, turned up.  He decided to stand almost in front of me.  Not quite, and had I been using a long lens to catch just a small part of the display, this wouldn’t have been a problem.  I wanted to use my wide-angle lens though, to capture the full height and breadth of the display, as well as the full length reflections in the water.  I, therefore, thought that it was reasonable to politely ask whether he could move a bit.  I wasn’t too chuffed when he refused flatly, because moving to the left would have put him in front of a family group that was sitting on the ground, and who had only been there for about 15 minutes, and moving to the right would have meant that the Stewards were not evenly spaced along the barrier.  I tried to explain that I had set up over one and a half hours earlier, in a position that was chosen to provide the best photographs, but still he refused.  Before the line filled up completely, I had to move three feet to the right, thus loosing my clear view through the gap in the plants.

I tell this story to show that dedication doesn’t always work out.  The intransigence of this ‘bloody minded’ Event Steward has proved that and will probably ensure that I remain a ‘not very dedicated’ photographer’, at least as far as firework displays are concerned.

The photos I’ve included have a very annoying patch of weed in the bottom right hand corner, but at least they don’t have the ‘high visibility’ jacket of a very annoying Event Steward on the left hand side.

Here are just a few shots to prove that I tried.  Personally, I think that the trees on the far bank of the lake make this a potentially excellent firework photo opportunity, if only everything else would go right. 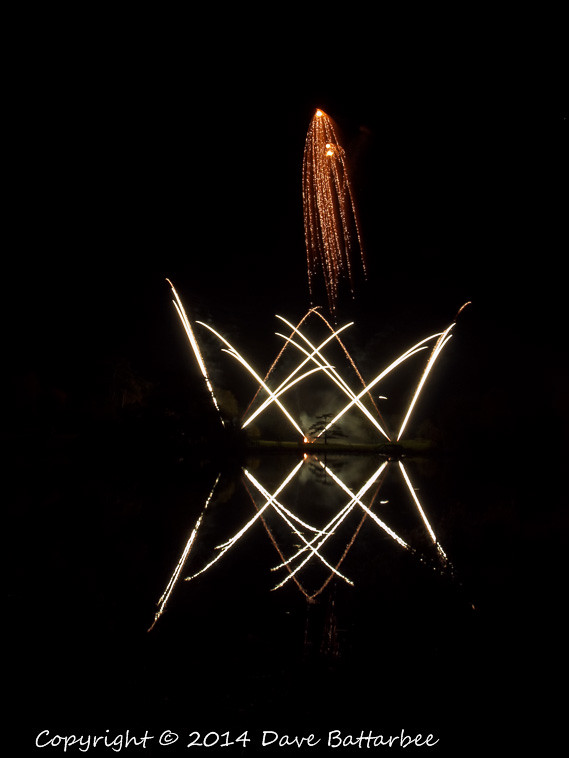 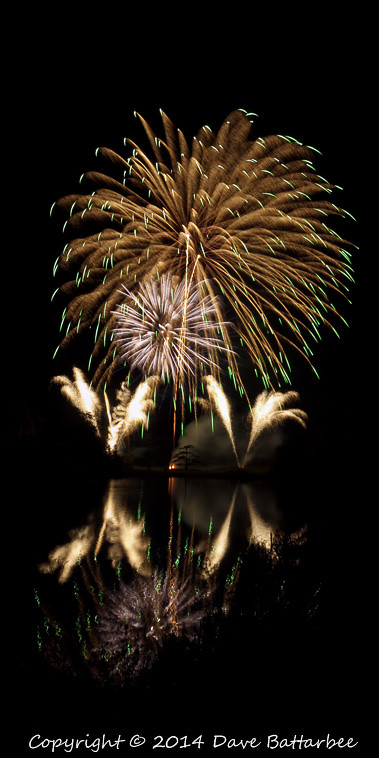 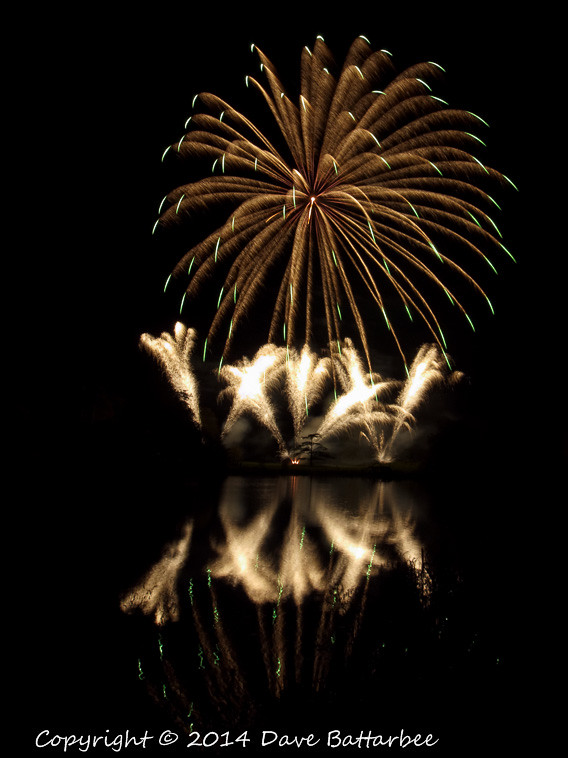 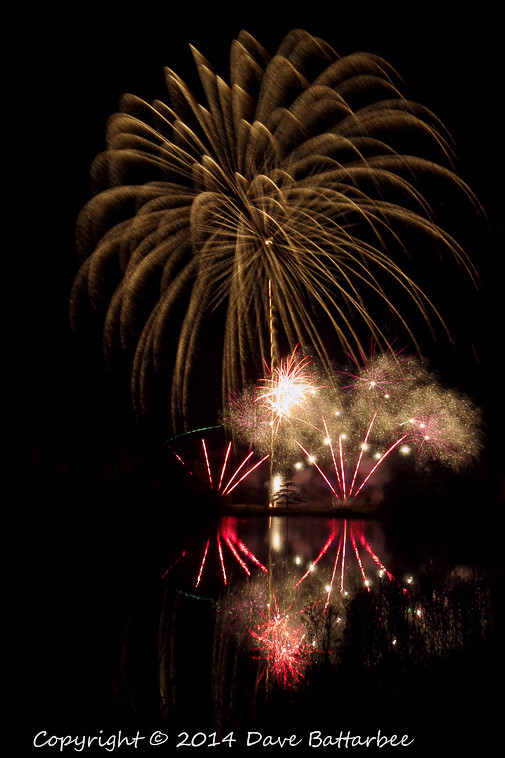 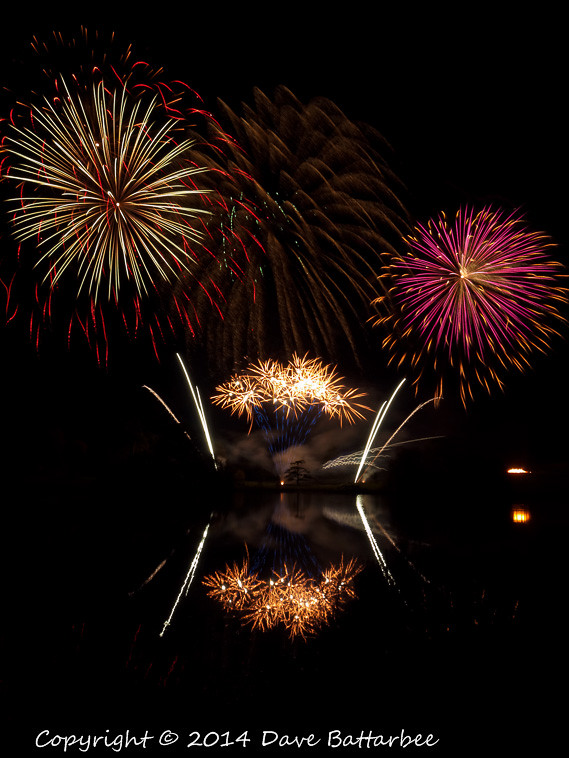 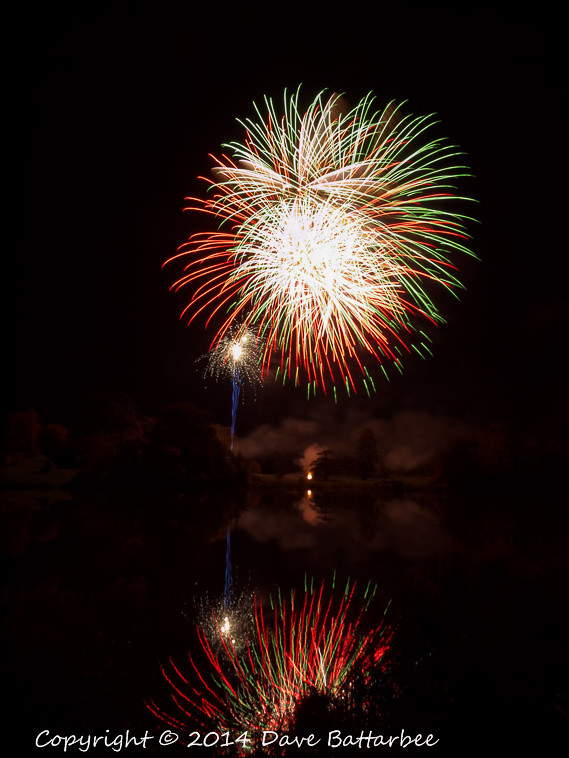 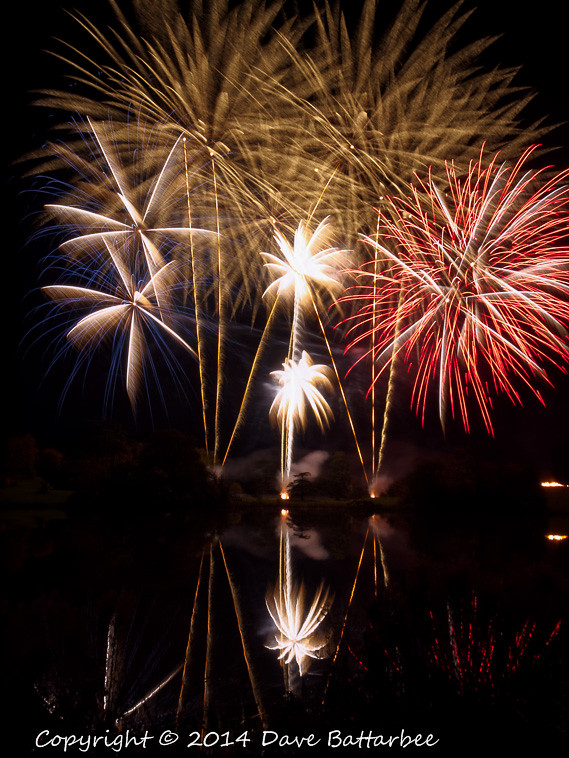 I don’t suppose that November 5th fireworks really warrant a post.  Fireworks photos can get a bit boring, unless of course they are taken in some amazing location.  Mine weren’t this year, or come to think of it, any other year.  But it was Saturday night and there was nothing on TV, so we made a spontaneous decision to visit a local organised firework display at Sherborne Castle, and I can’t go somewhere like that without a camera.